There were 5~6 people who registered to participate in the Spam Lunch performance today at Your Friend exhibition at Gallery Factory. Around noon, most of them showed up - each bringing a can of Spam. We set up the rice cooker, hot stove and other food and utensils. More people came over as we started cooking Kimbab, sea weed rolls. We were strangers, making lunch together and talking about how to send it to other places, laughing and enjoying ourselves. More people dropped by, eating a piece of roll or two. I explained David Horvitz’s practice in general- the mail art, ranging from poetic notes on his twitter account and complex curatorial project like Cigarette Beetle (which I loaned from the Park Library in APAP for the show). His way of working has inspired my studio practice as well as curatorial work. And also having a generous and humorous friend like him around has been great. While this performance was conducted by myself, it was still a form of collaboration and correspondence with him. 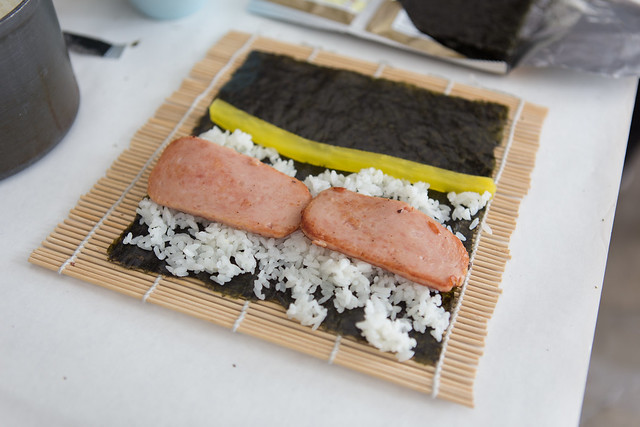 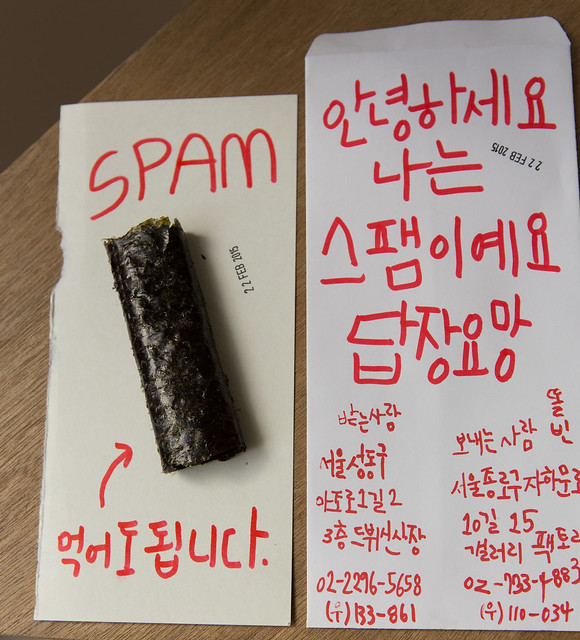 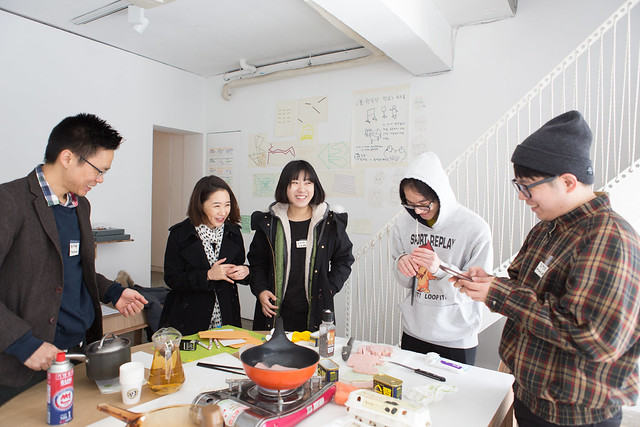 I asked the participants to search for someone or institution in Guam, Okinawa or other symbolic places with distinct Spam cuisine, and decorate an envelope, write a note asking the recipient to return another Spam-Mail to the exhibition. Some people also made their Spam-Mail for the folks they already know. After a short and festive lunch, the participants, who came to the gallery on their own, left in groups of two or three.

The Spam Lunch began sometime in 2012, morning after heavy drinking and eating at David’s old place in Bed-Stuy. I woke up by Demian, the cat. Soon after David woke up and we looked for something to eat. There was spam, rice and egg. Also some kimchi left over. We cooked the spam and ate breakfast. We ended up cooking spam for lunch at Recess Activities in Soho in the summer of 2013 and sent it to anyone who asked for it over the Internet. David makes art projects, or life situations, that are on the borderline of poetry and jokes. The Spam Lunch project was no different, it was an inside joke that we tried to make more pronounced and open ended, inviting others near and far. 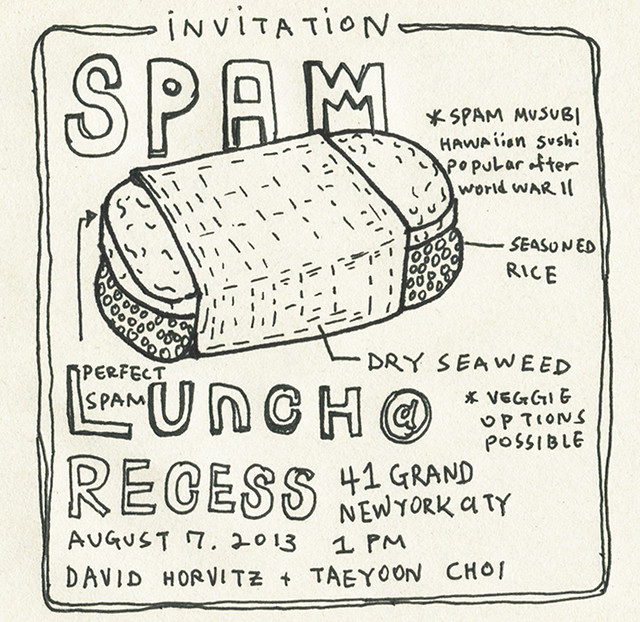 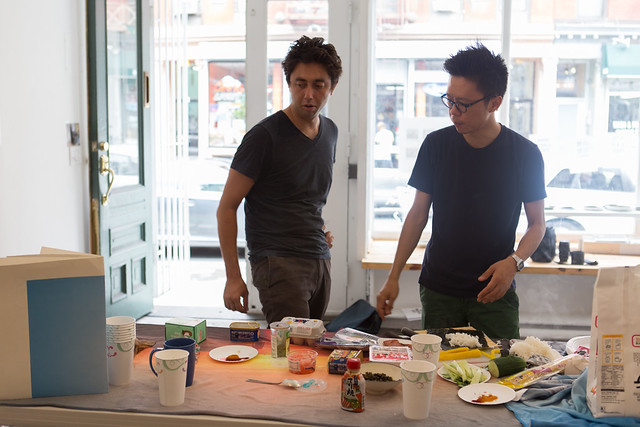 An article on Soho Strut about the Spam Lunch. 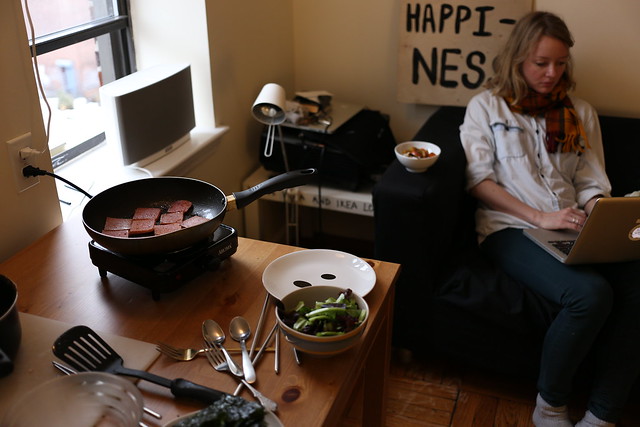 There were few more occasions when we cooked spam and shared with others. It may be we just liked the taste of the quintessential junk food, or we were fascinated by the rich narrative, significance and aesthetics of the thing that was once ubiquitous. Conversations lead to the history of U.S. Military occupation in Asia and beyond. Many of the occupations have been relocated since the initial period, while new bases are being built, including the one in Jeju Island, South Korea. Spam is one of the apparent artifact of the history of 20th century warfare, cuisines affected by the makeshift use of abundant military resource and transformed the local taste. 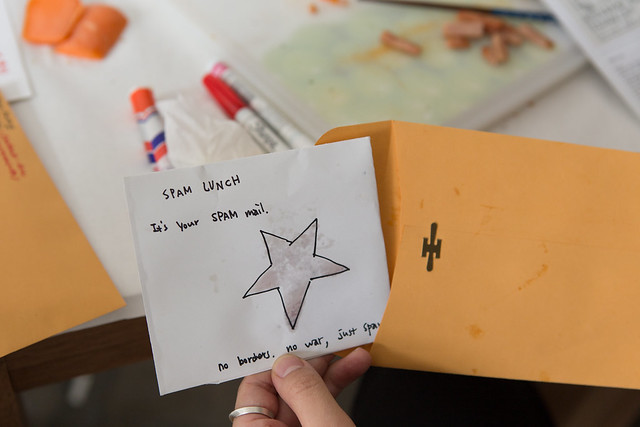 At the gallery, I set up a poster David made. It was a image of the ocean seen from the southern most part of Okinawa. I wonder where is the place the borders disappear, where war becomes meaningless and all mails (emails, snail mails and shipping containers full of stuff) becomes Spam-Mails. 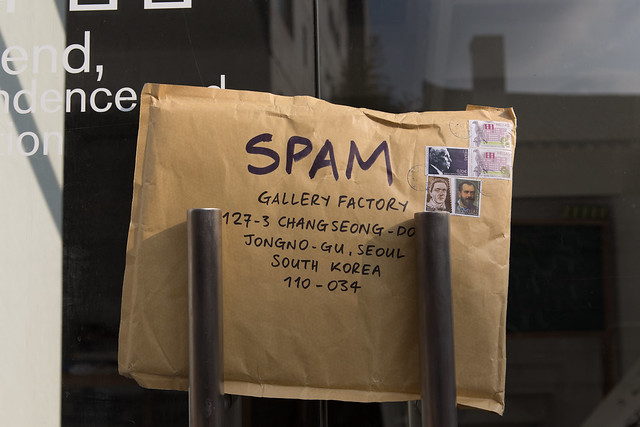 And we got some spam mails! this one was from Greence!

Please send Spam-Mail (Fried spam in an envelope) to

All Spam-Mails will be collected, packaged and donated to a public accessible art library/ archive in South Korea. 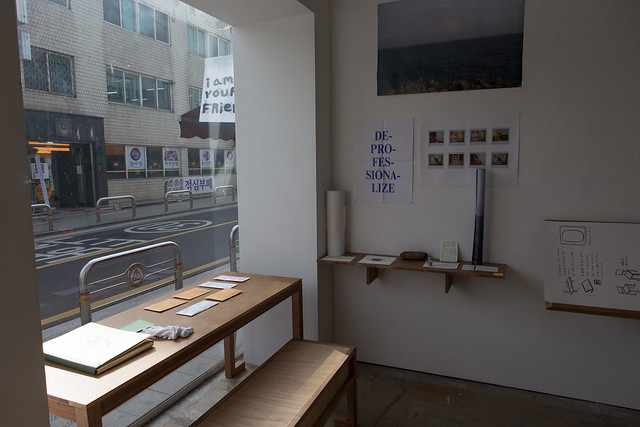